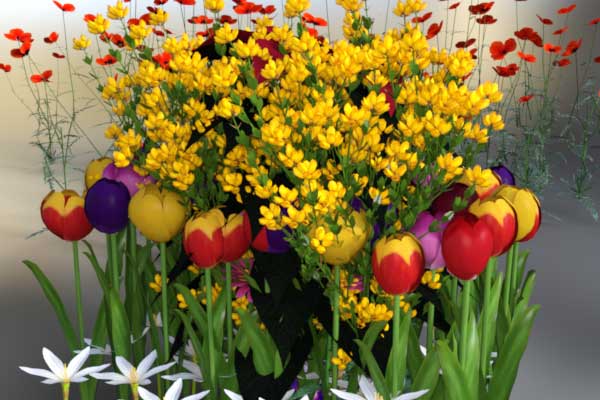 The Castleton Garland, is held every 29th of May (unless this falls on a Sunday, in which case the celebration is held on the Saturday) in the village of Castleton in Derbyshire. It's origins are lost in the mists of time, it has gone through several different incarnations as fashions have changed, and there is even some debate about just what it really celebrates!

If you want the official reason; it celebrates what is known as Oak Apple Day. This was a public holiday held on 29 May, to officially celebrate the Restoration of the Monarchy, which took place in 1660. People would wear oak leaves to signify the oak tree that King Charles II hid in, in order to escape the Roundhead army in 1651.

Some people believe that the ceremony originated back in the 18th century, when it grew out of the ancient rush bearing festival, in which the local people collected rushes to strew on the floor of the church, which in those days was likely to be of just earth.

Another theory is that the reasons are far more ancient; and that it is a celebration of the Green Man. Oak leaves were one of his symbols. He was a pagan symbolism of mother nature; Derbyshire was of course deeply rooted in the worship of nature and many traditions such as dressing the wells (originally to appease the water sprites, but now more to do with attracting tourist) still survive.

In its current form the celebrations begin with a parade of the Garland King and his lady riding on horseback from one of the local pubs. They're both dressed in Stuart costume but the king wears a huge garland of flowers which completely covers the top of his head and which is reputed to weigh around 26 kg (that's between 56 an 60 pounds in old money).

This must be extremely hot and uncomfortable for him and although the parade stops at every pub on the way around the town the poor man cannot take it off until the end of the ceremony.

He is accompanied by the local band playing the Garland Tune and young schoolgirls, all dressed in white, who dance at each pub.

Finally the king is allowed to ride up to the church, where much to his relief the Garland is taken from him and then hoisted up to the top of the church tower where it is placed on the central pinnacle.

There is then dancing around the maypole in the village square, before the band marches back, again playing the Garland Tune, and the day is finally at an end.